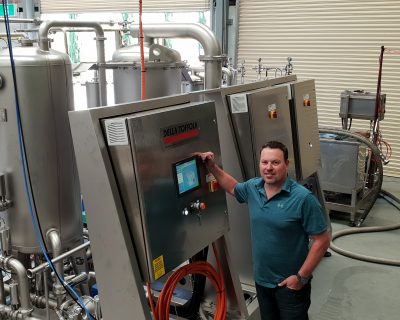 McLaren Vale contract bottling facility Torresan Estate took delivery of a new Della Toffola crossflow filter in time for the 2019 vintage and couldn’t be happier with the results.

Damian Torresan said the facility had only ever had lenticular filtration to offer clients, which was “being used for more of a polish rather than a filtration service”.

“Ten years ago I would say 40% of my clients would have accepted crossflow filtration for their wines, now 95% of my clients who are asking for filtration are demanding crossflow!” Torresan said. “The technology has become widely accepted, especially when you look at the results and the minimal effort required to achieve super clean wines in just one pass. The older technologies would require a wine to go through different media two to three times to achieve the same cleanliness.”

Torresan said the Della Toffola CFK200 was chosen for its versatility and speed. “It has the ability to not only do large volumes of wine quickly but can shut off its large 170m2 module and operate only its 30m2 module for small batches under 1000 litres.

“The ceramic membranes have a 10 year guarantee that in itself was peace of mind.

“Being a contract site we are very aware that I’m not always going to know what’s in a wine or its current condition, what additives it may have received; all that I’m going to be told is to filter it. Knowing that Della Toffola was more robust in this area was the final selling point.

“The CFK200 also has the ability to run after hours and gives me real time numbers of its progress along with me being able to remotely operate it. So far the dam thing is running so quickly we haven’t gone close to running after hours,” Torresan said.

“When we fired it up on the first day we had a 30 kilolitre parcel of wine that was 20NTU. It was operating at 25,000L/hr; it delivered the wine at 0.38NTU with a wine loss of 85L. I was super excited with those numbers.”

Torresan said his company’s main application of the Della Toffola CFK200 would be to get wine to bottle spec within 24 hours of bottling. How would he sum up the performance of the crossflow filter so far? “Awesome! The sheer speed and results have been outstanding,” Torresan concluded.

For more info on our range of crossflow filtration solutions for your business, please Contact Us