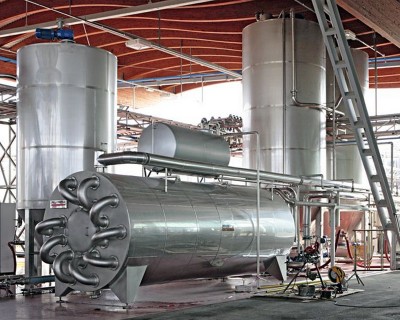 A common perception is that ‘Flash-Detente’, or Bio-Thermocooler Vinofication – is a new method of extracting flavour and colour from grapes. It appears that Mr Frank Smith from Pera Australia has this view, as detailed in the ‘Flash extraction boosts flavour’ article published in the April 2010 edition of Grapegrowers & Vignerons. In the article, Mr Smith describes a new extraction method being trialled in California.

To contrast this view, Della Toffola has been offering ‘ThermoCooler’ technology for the last two decades, with over 50 installations in operation in wineries across France, Spain and Italy, as well as Chile and Argentina.

In the ‘Flash extraction boosts flavour’, Richard Gibson of Scorpex Wine Services said that no commercial plant has been established in Australia, though he was involved in small scale trial work at Provisor. To correct this, a commercial Della Toffola 30 tonne/hr system was installed at the Simeon Wines (now Australian Vintage Ltd) site at Buronga Hill, New South Wales.

In a little more detail, the ‘ThermoCooler’ system is a method of vinification adopted to aid in the extraction of colour (anthocyanins), the extraction of tannin and other elements to promote structure, the extraction of varietal aroma and to ensure the maximum stability of these extracts. To achieve these goals rapidly and continuously, the system works by rapid heating and instantaneous expansion of the grapes in a high vacuum. The advantages of the system are:

With a commitment to ongoing innovation and R&D, Della Toffola recently released their second generation of ‘ThermoCooler’ equipment, the multi-purpose ‘Biothermo-Chiller’. On the strength of its experience of temperature regulation in vinification, Della Toffola has developed this new crushed-grape immersion treatment system capable of regulating the temperature from +95 to -1°C while assuring the utmost respect for the grapes and keeping operating costs right down because a single Biothermo-Chiller unit suffices for both thermo vinification and must freezing purposes. Della Toffola models are available from 1.5 to 60 ton/h.