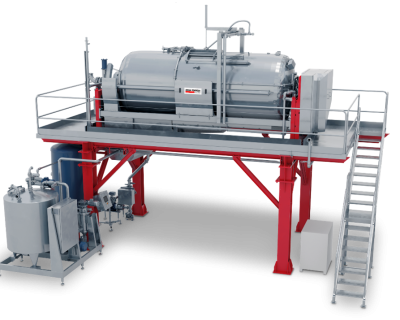 Automation has long been a feature of Della Toffola press extraction, with intelligent programming also integrated as a feature in the press range for many years. But artificial intelligence, or AI, integrated into juice extraction is something of another level when discussing the use of membrane press technology. Della Toffola Pacific managing director Paul Baggio provides an overview of how AI is being utilised and explains the benefits this will bring to winemakers.

Over four years ago, the technology development department at Della Toffola, having already started extensive work with artificial intelligence (AI) in the development of the company’s Omnia high solids crossflow technology – in particular the formation of ‘clustering’ technology used by larger winery customers through juice solids and wine lees separation and clarification – had evolved an extensive understanding and intel around the subject of AI.

That Omnia clustering technology was, by 2017, harnessing an already significantly evolved AI algorithm.

The high solid separator plants, supplied in large numbers to winemakers such as Delegat, Indevin and Australian Vintage Limited – whereby the automation logic was still some road down the track, and these were operating in a long run autonomous slave v master clustering formation – were the precursor to the current capability around the ‘intelligent press’.

What distinguishes AI from what previously defined most automation in membrane bag presses’ ‘intelligent programming’ is the ability for AI to, in a cognitive manner, adjust and recompute press extraction and press drum rotation strategies using a significantly elevated volume of real time infeed data points. Consider how the AI relationship operating with the Omnia high solids crossflow and cluster tank operates: the system is a virtual live autonomous operating system with Omnia units, sometimes over eight individual filters all feeding off each other’s data, be it related to permeability, tank on-board levels, Delta P levels, concentrations of solids in percentage terms or filtrate NTUs. The systems are operating autonomously for long periods of time, stopping/starting on their own accord, cleaning themselves and going dormant as directed by the cluster tank. The basis of where Della Toffola have arrived with their AI, with their membrane press juice systems, found its genesis many years earlier with the innovative work achieved with the Omnia separator and clustering high solids development.

The basis of the earlier automation for the Della Toffola presses was to some degree already operating very differently to other press manufacture systems. With Della Toffola press designs being distinguished by their uniquely central membrane and the manner by which the membrane press bag was being automatically manipulated so as to reduce the incidence requiring the membrane bag to retract and extend often was by using air demand as the control logic point.

Other intelligence operations require fixed input data points e.g. 650l/t free run, 750l/t light press and so on. Apart from rendering any movement forward in that line of automation engineering to be essentially semi-automatic in its construct, the lack of flexibility and responsiveness left such automation platforms redundant for such a dynamic product as grapes, and the resultant process of juice extraction.

The problem resulting with many systems was that each year presented a new harvest, with different varieties, clones and regions to be considered; the reality of those fixed points were never corrected or adjusted to make any rudimentary system claiming to be ‘intelligent’ commercially relevant.

Ultimately, traditional systems using this framework to try to automate a press system would compromise yield, quality and, ultimately, generate higher levels of suspended solids. The Della Toffola system understood this and shifted well over 15 years ago to a very different, radical approach.It was that shift to using air demand that opened a different pathway enabling an engineering alignment, as opposed to classic old school winemaking, for true AI to be engaged in grape press juice extraction.

The presses are equipped with significant sensors and metering that provide the on-board PLC a range of real time data, be this the weigh cells, so as to calculate effective distribution in the press tank with real tonnage volume estimates, or related to colour and turbidity reading systems, f low meters, tank pressure levels, density measurement, to name a few.

The inner wall of the tank is lined completely with drain screens, so as to reduce drag for in-fed grapes to be more efficiently redistributed without generating solids and the technology around air demand, controlling the rapid extension and contraction of the membrane bag, has evolved to be extremely efficient.

The main drivers for any winery equipment investment by larger scale winemakers has evolved over more recent years. Seeking a juice extraction process that is low in suspended solids is a critical driver for any new press investment selection decision.

Every additional percentage of suspended solids generated by a press costs, be it lower yield and additional down- stream capital, or by needing labour or separation machinery to be deployed. Thus a technology that can in real-time understand what precise press cycle will best extract maximum yield, whilst doing so with the lowest required drag or rotations of any bag press, will deliver that outcome.

Similarly, when discussing press cycles, the current press program for a side bag membrane press, is around 160- 180 minutes with most side bag presses requiring full turnaround times measured in 4-5 hours, with median suspended solids rated at 4-5%. A standard Della Toffola press, for even the largest of sized bag presses, delivers a pressing time of 90 minutes, with suspended solids of 2-3%. AI standard pressing cycles are achieving as low as 60 minutes with the potential to reduce the even further. Suspended solids extract rates are also being reduced further as well. With faster pressing cycles, we have already seeing lower levels of oxidation and, therefore, extensive higher quality of juice extract. Overall, AI delivers the most gentlest of grape juice extraction and handling, by virtue of significantly lower solids in suspension, greater efficiencies downstream and with and overall reduction in labour and higher yields.

Furthermore, the capital cost of deployment, compared to other juice extraction systems, cuts by half the typical front-end press investment spend.

Development of the AI technology

The technology, which has been installed this harvest for winemakers in South Africa, Italy and the US, is very much a living and operating technology that continues to evolve. These first commercial plants were driven by over 160 press cycles from grape varieties in France, South Africa, Italy and the US. The various peripheral technologies, such as automatic robotic ‘clean-in- place’ and retracting water collection trays, which enable wash water to be harvested and treated for reuse, has long been integrated into various other Della Toffola press models.

For more information about Della Toffola’s latest press technologies, please contact us via info@dtpacific.com or call +61 (03) 9487 1140