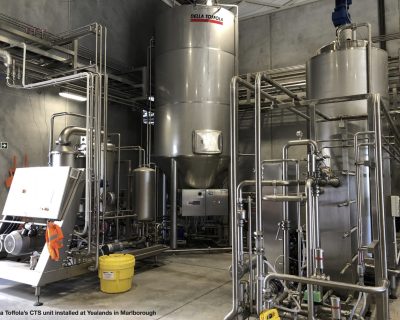 Wine contains ions of tartaric acid and potassium. Under certain conditions, these ions can combine to form potassium bitartrate, an insoluble, crystalline material. Formation of potassium bitartrate in the bottle is a negative quality factor in most markets. To prevent crystal formation in the bottle, most wines are stabilised prior to packaging. Cold stabilising techniques are generally based on one of two principles: Reducing the concentration of one or both reactants in wine to a point where no further crystal formation can take place or by adding substances that inhibit the formation of crystals.

The challenges and cost imposts for stabilising wines through this traditional manner have long been understood: be it the exponential escalating costs to energy, multiple wine movements, wine losses, impacts to wastewater systems, the time delays of multiple weeks required to effect stability and, then, the risks of ‘over-stabilisation’, are just some of the frustrations surrounding the traditional process. The pathway seeking more effective and efficient wine stability has been extensive and gave rise some 40 years ago by Della Toffola to develop PolarCryo technology, an inline continuous tartrate stabilisation technology all encompassed in a single piece of plant; a system which is today employed by many hundreds of winemakers across all wine regions around the world.

The Della Toffola continuous tartrate stabilisation (CTS) system PolarCryo (ref Process flow) is designed to take wine from the cellar storage tanks at temperatures of 12 ̊C-16 ̊C. These levels of storage temperatures are somewhat elevated to the current target storage temperatures operated by most winemakers during the post-harvest. The benefit here post-vintage is that the overall winery refrigeration plant can wind down, reducing the energy consumption when needing to hold whole inventories at the low levels many currently do. The wines pass through a plate counter to current heat exchange unit integrated as part of the system that takes the wines from the storage temperatures to around zero degrees Celsius in the one pass, getting the wine ready in preparation for the wine to enter the evaporative blast chilling process.

It should be said the Polarcryo systems are fully automatic and recipe control driven. The process in effect begins by first performing a conductivity sample test of the target wine on a dedicated laboratory unit termed Polar Point. The target profile is entered into the PLC of the CTS plant and the resultant recipe for the wine target temperature, the residence in the blast chiller are all set into the program. The wines reside in the blast chiller for a couple of minutes, to which then the wine progresses into the precipitation crystalisation tank. The target crystalisation cylinder has, in suspension, small potassium bitartrate crystals that when combined with the wines naturally laden in potassium,

generate ever nucleating crystals that precipitate, to which in the extreme chilled state, the crystals remain insoluble. With the crystals decanting towards the base of a specialised formed cylindrical conical tank, the clean wine diverts off via a racking point to a pre- clarification stage via hydro-cyclone separation, then to the inline ceramic membrane cross flow filter.

The uniquely thermic resistant ceramic membranes maintain a stable flux despite the temperatures and sterile filter at 0.25um, cleaning the wine of any tartrates, capturing all the remain crystals in the retentate loop of the filter membranes. The wine post-filter is analysed inline via a conductivity testing unit, validating if the wine is tartrate stable. Any wines that do not qualify are re-looped back into the circuit for re-treatment, all compliant filtrate moves forward towards the counter current heat exchange unit from which the wine originally entered, adjusted in temperature and delivered back to the cellar.

The process is on demand, requires no seeding of floc to nucleate for white wines, (some red wines may subject to the phenolic compounds and structure of the wine need some seeding) yet with the process being a closed loop, generating no alleges, with minimal movements, it offers a more sophisticated and effective means of wine tartrate stabilisation. The system is designed to operate with very minimal labour and oversight, requiring no additives, with all cleaning driven by an onboard CIP (clean in place) solution that is also automatic. The cooling circuit, which is heavily insulated even when not in use, remains at the target chilled temperatures for many days, able to be swiftly mobilised to operate on demand. The unique design of the crystallising tank, with its sharp 45 degree sloping floor, is purposely designed to capture highly concentrated forms of solid crystals, thus maximising yield recovery of wine from every batch processed. This differs significantly from the predominantly f lat formed base of traditional wine tanks that upon each racking leave wine volumes in residue, ultimately volumes being lost to drain.

Many of the challenges associated with the traditional contact and hold stabilisation process, along with even the issues caused by technologies such as electrodialysis, or the additive formulations, being colloid protectors, have been placated by the simplicity of the PolarCryo process. Electrodialysis as a solution has been tested for many years, yet for many wines the impact to the wine pH, and the requirement for any target wine needing to be pre-treated through a sterile rated cross flow filter, along with the highly acidic stripping water waste streams associated, has rendered the technology prone to criticism.

It was my personal experience working with Electrodialysis some 18 years ago that reignited my interest in Polarcryo CTS. The unstable nature of the

very expensive cation ion exchange membranes make calculating any payback model difficult. The build of the PolarCryo is all stainless steel, thus similar to a winery destemmer, crusher or press, a suitably long-run 20 year operational life can be amortised by comparison. To this, a payback on investment model can be calculated. In respects to an additive based solution to tartrate stability, and the use of colloid protectors, whether it be metatartaric acid or carboxymethyl cellulose, there are similarly challenges. Apart from the additional variable cost per litre imposed when deciding to take the additive path, or the challenges incurred relating to needing to specifically label for any additions, the varied uptake has its detractors, due in part to claims the additives inf luence an off taste; others pre-occupy themselves with the multiple handlings and racking’s, along with the inevitable risks to oxygen pickup and loss of wine quality such movements implicate. It is argued that much of the wine using inhibitors and protectors find themselves relegated to bag-in-box

for fear that the timeframes of stability subject to wine styles and storage conditions have not yet been long-run tested, and the risks to precipitation or shifts in the organoleptic profile are all apparent.

The PolarCryo technology operates on demand, can enter the circuit relatively high in turbidity (c. 100 NTU – yet experience exists to enable wines of far higher turbidity to enter the circuit), thus not requiring any pre-cross flow treatment. Wines that exit the process are inline checked and validated to being tartrate stable. This enables valuable record keeping and reporting of wine quality control processes. The technology is fully-automated and able, similar to a cross flow filter operate autonomously. The footprint is compact and enables the stabilisation process to be localised within the winery, shifting the impost of extensive hours required throughout spare cellar operations when performing traditional contact and hold and additive- based stabilisation processes. Other than extensive labour being required, the implications for large winemakers who currently affect their contact and hold stabilisation over the cellar tank farms are that significant wine losses are generated. Not only are valuable wine volumes lost on each racking (by contact and hold and other additive- based stabilisation processes), these wine residues, typically high in acids, are having adverse effects to winery waste water functionality. The reduced pH levels to waste water ponds are impacting critical fungi growth required to effect efficient wastewater systems to function. Overall, the Della Toffola CTS system compared to traditional contact and hold processes dramatically reduces, by over 100%, winery energy usage, along with significantly reduced volumes of water use and labour.

The reduction to energy use, water consumption and labour handling in the cellar are all very clear benefits that have been gained by winemakers who have invested in Polarcryo, yet the most dramatic advantage we observed has been the overall operations in the winery. Ordinarily, when performing traditional contact and hold tartrate stabilisation, wines are notoriously held at very low temperatures in storage. Wines over the duration held in tank commence to build a crust of tartrate on the tank walls. With wine required to be sent to sub zero Celsius temperatures and held for some weeks at end, a very thick layer of ice is built along the cellar tanks. The time

and water (often hot water) required to get tanks clean so as to be made available to effect a further wine blend could be a whole day to a couple days lost of subsequent tank utilisation.

Ultimately, the winery is required to be designed with a greater number of wine tanks, so as to provide redundancy in the winery design to allow for any blending delays. The value of the Polarcryo technology, in enabling wines to be held at a higher temperature during storage, not only provides significant savings in reduced energy usage, but by virtue of wines not needing to be stored so cold, little to no crust build-up occurs in the storage tanks, and turn-around times of the tank infostructure gets reduced to a couple hours instead of days. The savings for any winemaker spending idle money on sunk infrastructure as stainless steel tanks is significant.

Overall, the Della Toffola CTS technology is ‘on demand’, thus being able to take wines post-ferment, that have been broadly clarified and held ready for any number of SKUs, to be blended inline with stabilisers such as bentonite, tannins, S02 and other constituents – all in one movement into the CTS, to be tartrate stabilised and then cross f low filtered, tested for compliance, and then continuing inline to bulk packing – all being set up for our more progressive and technically astute winemakers.

The technology has been taken up locally both in Australia and New Zealand, and we are currently building a new 10kl per hour plant for delivery to Marlborough. The work achieved by Yealands with CTS has been most impressive, outlining the ability to utilise existing CFKN 170 cross flow filters to process the wines containing tartrates in suspension, and also to use Omnia high solids cross flow technology to manage all the discharge solids from the cylindrical conical crystallisation tanks, as a whole other level of process efficiencies being integrated. The latest system we are building takes into consideration a view to use inline blending technology to add a number of other additives such as bentonites and concentrates, along with SO2 into to the circuit process. This is only rendered possible as Della Toffola’s standard range of CFKN cross flow filters can process bentonite and KHT, and whilst being ceramic, can maintain high flux rates despite sub zero Celsius temperatures during filtration. Other cross flow media, such as polymeric membranes, are not able to provide the integrated functionality, as we have similarly found stainless steel and titanium membranes (such as metals constrict) struggle under the extremely low product temperatures.

For more info on this technology please contact us via info@dtpacific.com