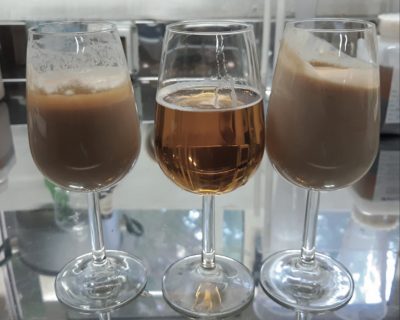 Amongst the most exciting developments in beer brewing have been developments in crossflow filtration, which has not only modernised the brewing process, but also reduced the production footprint at the same time. Della Toffola Group has a long association with the beer industry, supplying diatomaceous filters since the early 1970s to many of the world’s leading beer brands. Over the last twenty years the company has developed further into a leading manufacturer of processing technologies and turnkey brewery solutions. Della Toffola has also been at the forefront of crossflow filtration development with a focus on ceramic membranes.

The material from which ceramic membranes are constructed is very strong and durable, easily able to take many thousand CIP cycles at high temperatures with no appreciable wear of the membranes. The lifespan of ceramic membranes is on average fivefold longer than the lifespan of polymer membranes. The effective filter surface in the ceramic membranes is between 5 and 8 μm thick, this very thin layer is characterised by a high hardness and robustness. Due to the very thin construction, particles in the retentate cannot block the actual filter structure, enhancing its effectiveness and prolonging membrane life.

The channels in ceramic membranes can be constructed in differing shapes and diameters, as well as porosities ranging from nano filtration over ultra filtration to micro filtration. This large range of possibilities means that the filter can be customised to a porosity ideal for the required flavour profile and to a diameter and shape to maximise retentate concentration, and with that, the maximum yield of product per filtration.

The Della Toffola ceramic filtration modules normally have a porosity of either 0.45 μm or 0.8 μm. These porosities have a more positive effect on the organoleptic properties of the finished beer than 0.2 μm porosities. Polymeric membranes, on the other hand, are always around a porosity of 0.2 μm in order to maintain the mechanical strength of their membrane strata.

Crossflow filtration requires a certain tangential speed over the filter membrane surface to sweep the surface clear and prevent clogging. The speed of the product to be filtered is governed by a number of factors, of which one of the most critical is viscosity. As viscosity in- creases during the filtration cycle, the speed slows and a critical point is reached where the retentate must be discharged from the filter. The smaller the membrane diameter, the earlier the need to discharge is reached. With polymer membranes the critical viscosity is reached at around 8 percent suspended solids, with Della Toffola beer filters this critical viscosity is reached at around 15 percent suspended solids and with the Omnia B filter from Della Toffola the solids concentration can reach up to 90 percent before the retentate needs to be discharged.

Beer recovery from lees has in the past been very rudimentary with few options being available, with the resulting product generally of substandard quality. Brewers are facing stiff competition and the need to reduce yield losses as well as effluent, have resulted in Della Toffola developing a cross flow filtration solution offering a high quality filtrate from lees.

Della Toffola’s ceramic membrane technology is now finding favour with many breweries ranging in size from craft brewers to modern large industrial producers. With the Omnia B filter beer clarification, recovery and sterile filtration can now be achieved with a single filter.

Many advantages such as the superior mechanical resistance and ability to withstand aggressive CIP regimes were recognised as being very important to brewers. Della Toffola’s range of beer filters are all capable of 9 bar operating pressure with extremely low levels of dissolved oxygen pickup. They work at sub-zero temperatures without filtration flux and are suitable for the use of processing agents like PVPP.

Products with very high turbidity and solids can be processed in the Omnia B filter in a single pass to sterile, with no more need for a centrifuge or any other filtration steps.

The ceramic membrane Omnia B technology offers an opportunity for the brewing industry to consider options to reduce the number of steps involved, reducing CAPEX, labor and energy input all at the same time. Recovering beer from lees does not just improve the economic yield, but also significantly limits the BOD of brewery effluent. Losses from lees (subject to the type of yeast, storage times and the temperature of the lees) can equate to about 3 to 5 percent of the total volume with suspended solids of 25 to 35 percent.

The Omnia B filter design is very compact with a footprint similar to the diameter of a 200-hl fermenter. The Omnia B filter is not limited to any individual beer style and will filter lees with 30 percent suspended solids to a sterile 0.45 μm. The unit is completely automated, with its own CIP system and temperature mixing unit. The two step pre-filter with rotary brush straining system separates larger solid fibrous strands and particulate matter similar to a centrifuge. A secondary rotary brush cleaning system at the top of the filter membrane housing ensures hop solids and fibers are continuously removed from the filter loop. The fully hygienic and anaerobic design ensures a yeast free filtrate with less than 5 cells per 100 ml.

A recent deployment of an Omnia B filter to a brewery in Italy provides an example of the Della Toffola ceramic membrane technology to recover beer volumes in the brewery process. The beer product was a high gravity lager beer with suspended solids of 36 percent at the inlet of the filter. The brewery operation involved almost 100 hl of beer which yielded 57 hl sterile filtered beer (with 0.45 μm) and a retentate volume of 40.86 hl, (58.2 % recovery and 41.8 % were retained with 86.2 % suspended solids). The recovered beer clarity was 0.45 EBC. The brewmaster was positively surprised at the quality of the filtrate which up to that date had been disposed of. By adopting cluster and smart technology, solids from the brewery fermenters can be pumped away freeing up fermentation cycle rotation times and ultimately the number of fermentation tanks any brewery cellar requires. Beer solids such as lees can be managed autonomously in long run automation processes offline by Omnia B technology. Yeasts and other solids can be collected and concentrated to significantly higher levels offline, as a process separate to the brewery fermentation production ow. The organoleptic quality and EBC values provided by the Omnia B at levels of 0.45 μm operating under the same pressures as the unfiltered beer tank and the filtrate or sterile beer tanks ensure dissolved oxygen pick up remains at near zero and CO2 losses are minimised.

For a brewery with an annual beer output of about 1 million hl and an average loss of 3 percent in the brewery cellar, Omnia B enables the recovery of 18,000 hl of beer. In this case, an investment in Omnia B would pay for itself within the first 12 months of operation. As the Omnia B is available in sizes ranging from 8 m2 through to industrial sized 340 m2 and even larger 850m2 units, the technology is accessible for brewers of all sizes from the most artisan craft brewer to the largest scaled of breweries.

For more on our crossflow filtration solution for beer, please contact us via info@dtpacific.com