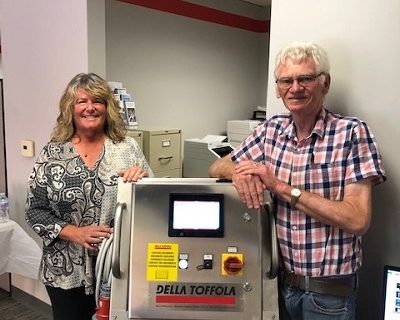 “At the recent SIMEI Exhibition in Milano, Italy, the local company Della Toffola was given an innovation award for their new DTMA machine.

This machine is based on original research by Australian researchers, Dr Angela Sparrow and Dr Richard Smart, working at an experimental winemaking facility near Launceston in Tasmania.

They called their method ACE, abbreviation for Accentuated Cut Edges.

The basic principle of their method relies on the idea that fragmenting winegrape skins mechanically without damaging the seeds facilitates diffusion of the cell contents into the fermenting must.

The initial experiments used micro vinification and chemical analysis which were then confirmed with commercial trials and systematic sensory evaluation.

The ACE method and wines were shown to Della Toffola engineers which led to the development of the DTMA machine.

Sparrow subsequently tested a DTMA prototype in Australia, New Zealand and at Levada Italy during 2016, with the first DTMA commercial unit tested at six Australian wineries in 2017.

This finding has important economic implications for red wine fermentation management, allowing early press off just a few days after yeast inoculation with no loss in quality.

For more info on this tech, please contact us HERE