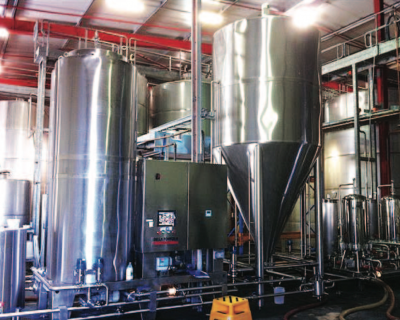 Two alternatives to the traditional but time-consuming and costly method of cold stabilisation were presented at a seminar titled ‘Efficiency and sustainability in the Winery’ held late last year by the Australian society of Viticulture and oenology. One of these was continuous cold stabilisation using the contact process which drew on Dorrien winemaking’s trial of a Della Toffola PolarCryo unit. Sonya Logan spoke with Dorrien’s winery operations manager Julie Montgomery to find out more.

Chilling is the traditional method used by the wine industry to achieve tartrate stability and is still the most common. However, an increasing number of alternatives are emerging and one Barossa Valley winery believes it may have found one that achieves results comparable to chilling but in much less time. Dorrien Winemaking began exploring alternatives to chilling when it recently moved some of its winemaking operations to a new site with limited refrigeration capacity. Its aim was to not only find a more rapid and energy- efficient method of cold stabilising wine that required less use of cream of tartar, but one that was more energy efficient than the existing refrigeration system. Having previously looked at other alternatives and deeming them to have their limitations, Dorrien turned to continuous tartrate stabilisation technology manufactured by Della Toffola.“Della Toffola is one of our equipment suppliers and we knew they made a continuous stabilisation unit so we talked to them about getting one over for us to trial,” explained Dorrien’s winery operations manager Julie Montgomery.
Although Della Toffola’s PolarCryo system still involves chilling, it comes with its own refrigeration unit so does not need to draw from external plants. Furthermore, Montgomery said, the refrigeration unit is extremely energy efficient compared with the winery’s existing plant.Dorrien has been trialling the PolarCryo system since August 2012, and so far has been impressed by the results. “This is the closest thing I’ve seen that achieves the same results as the traditional stabilisation method, and it does so a lot faster and more efficiently,” said Montgomery. “That’s because it’s basically the same process as traditional cold stabilisation; it just happens more quickly. And, the impact on the wine is the same as the traditional system too, which is good because some other alternatives can alter the wine.”
Montgomery said the first couple of months of the trial involved getting the operators “up to speed with the running of the unit and looking at other related areas of improvement for our business”. Now nearing the end of the trial, the winery still has some numbers to crunch, particularly in relation to energy consumption, before giving the unit its final tick of approval, but as far as speed and quality are concerned, the PolarCryo unit has proven itself on both reds and whites. And, having replaced the unit’s in-line micro-filter with a crossflow filter, Dorrien is now able to cold stablise and filter ready for bottling in one step, saving time and reducing the number of staff required to get to that point from two to three to just one.

Dorrien is currently working with Della Toffola to implement further modifications to the unit, including automating more of its operations, such as its use of inert gas to better manage dissolved oxygen levels in the wine as it passes through the PolarCryo and crossflow units. The company is also looking to improve the unit’s flexibility in terms of the minimum volume required for small batch runs.“The unit currently requires fairly large volumes to start; we’d like to get it down to 9000L,” Montgomery said. She said if the final number crunching resulted in the winery ultimately purchasing the PolarCryo system, Dorrien would put as much wine as it could through the unit. “There might be some very small batches of less than 9000L that we won’t be able to run through it but even if we have to cold stabilse those the traditional way, we’ll still be drawing a lot less energy than if we were processing all the wines that way,” she said.